The most incredible natural volcanic rock pools on Madeira Island lies in the island’s most northwest corner. Thousand of years ago, the island’s volcanoes discharged lava into the ocean, which solidified into black basalt rocks and created every swimmer and naturalists’ dream pool. At the bottom of these pools are rocks, coral and aquatic life, creating a safe haven and shelter not only for swimmers but also for small fish. The lava pools have a total perimeter of 3,800 square metres and are naturally filled by the ocean’s high tide.

There are two separate lava pools in the area, one that has been altered for swimmers and the other that is completely natural and untouched. Of course, the unaltered pool close to Ilheu Mole can be dangerous as the rocks are covered with algae and quite slippery. Regardless, the two times I had the honour to visit these amazing pools I absolutely had to take a plunge and be christened in the pristine waters, despite that both times were on a fresh, spring evening. When in Porto Moniz, you must swim in the pools; if not, the experience is not the same!

Porto Moniz is one of the oldest cities on the island and was discovered by Francisco Moniz, one of the first settlers and husband to one of the granddaughters of Gonçalves Zarco, a discoverer of the island. Historically, the region was isolated from the rest of the island due to its topography and could only survive through fishing and whaling, a practice which continued until the 1980s. The whaling station still stands strong on the mountaintop, where whalers would scope the ocean. Now, the towns economic activities rely on wine growing and fishing.

Porto Moniz is also known for its aquarium in an old fort constructed of the same basalt volcanic rocks. This aquarium showcases the local species found in the Atlantic ocean surrounding Madeira.

Porto Moniz is an amazing place to watch the powerful waves of the Atlantic Ocean crash against the spectacular volcanic rocks and fill the natural pools; although sometimes every so often an unlucky swimmer can be dragged out into the ocean. Regardless, Porto Moniz undoubtedly showcases the natural charm of Madeira and how it is completely unique and unlike any place in the world. 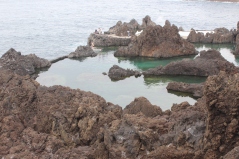 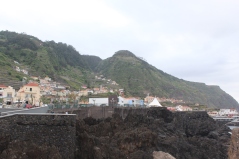 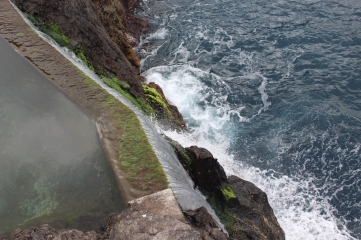