The Catacombs of San Gennaro are an underground world lying layers beneath the city of Naples. By walking only a few steps below the surface, you can travel back in time to the roots of Neapolitan faith. These catacombs are a massive burial ground with two levels extending 5,800 square metres. They date back to the second century AD when Greek and Roman law forbade burials in the city. The catacombs were dug out of Capodimonte Hill, which at the time was outside of Naples. In the fourth century AD, the catacombs were extended after the first patron saint of Naples’, St. Agrippinus, remains were placed in an altar of the underground basilica on the lower level of the catacombs. To this day, mass is still celebrated in St. Agrippinus’ basilica where worshippers can touch the saints’ remains through a hole in the altar. To the right of the basilica, in the entrance to the lower level of the catacombs, is a large baptismal font that was commisioned by Bishop Paul II. The ceiling of this level measures about six metres and there are around 3000 burials that have been discovered on both levels.

The upper level contains some of the earliest Christian paintings in southern Italy, a bishop’s crypt and the tomb of San Gennaro. From 413 to 431 the relics of the patron saint of Naples, San Gennaro, were kept in the catacombs. The tomb is located under the Bishop’s Crypt with a sceptre lying on the burial site. Right above the tomb, The Bishop’s Crypt is decorated with the first 14 bishops of Naples and some of the earliest mosaics.

In the third century AD, Christians began to use the catacombs with the simplest tombs dug along the walls and in the ground. The wealthiest burial sites were arched and featured frescos and mosaics.  The Catacombs of San Gennaro take you down the rabbit hole into an alternate world of faith, art, history life and death. 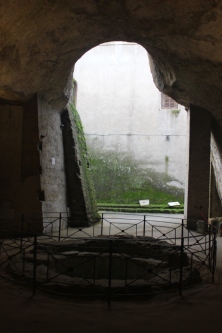 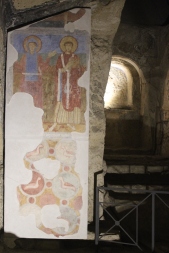 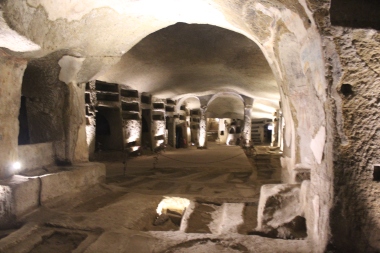 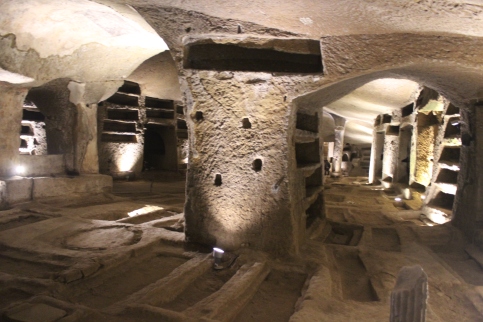 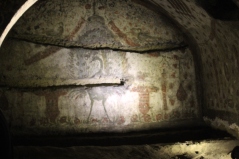